The story behind this long-standing beauty college in Citrus Heights

Citrus Heights Costco once had plans to add more gas pumps. What happened?

Theatre in the Heights to launch new comedy July 29

By Mike Hazlip—
The line between Sacramento and Placer counties runs right through the middle of Scott Meyer’s home, located on the far northern edge of Citrus Heights.

Meyer says the home was built in 1937 and appears to have originally been constructed in Placer County, but later additions put the bedrooms and front lawn in Sacramento County. 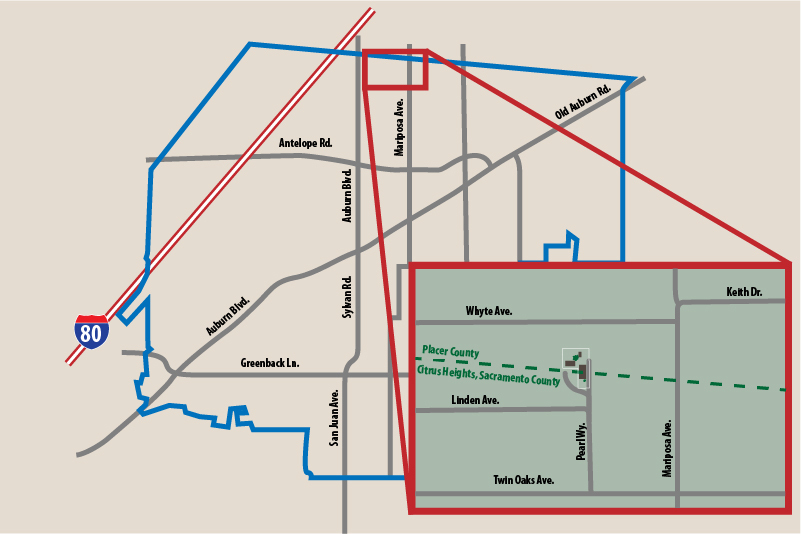 The divided home has become a running joke between Meyer and his wife, he says.

“It’s bizarre. You pay dual taxes to each county, separate taxes,” he said in a recent interview with The Sentinel. “When you have arguments with your wife, you tell her she has to go to one county, and I go to the other.”

Meyer said he prefers the Placer County side because that’s where the shop and kitchen are located, while the living room and bedrooms are in Citrus Heights.

The county line is “between the living room and the kitchen somewhere,” he said. “I think it’s right about where the couch is.”

Meyer said he had once considered painting a striped line across the ceiling, but later thought better of the idea.

“I think when they built this house, the first part of the house ended right there where that roof line is,” he said, pointing out a portion of the home that appears to be added on later.

A fence that divides Meyer’s L-shaped lot from his neighbor sits on the county line, he says. His neighbor’s property is wholly within Citrus Heights,

A garage at the back of the lot may have once been a carriage house because the old structure does not share the same dimensions as a typical garage, he says. The root system from a large tree near the building is lifting one corner of the structure’s foundation and Meyer is planning to tear it down.

Just feet away from the decades-old structure is a newly constructed workshop where Meyer builds modern race cars. He runs his business, Diamond Level Manufacturing, from a detached building that is within Placer County, but he accepts deliveries at his Citrus Heights address.

Originally, Meyer said his lot had two parcels in Placer County, but he combined them when he built the shop. He said the county typically discourages combining parcels, but Placer County allowed it because there was no access to the back lot.

During construction of the shop, Meyer says workers from Underground Service Alert (USA) had trouble determining what county the underground utilities were located in. Placer County inspectors also had trouble locating the property, he said.

“When the inspectors would come out here to sign off on the permits, and do the inspection reports, they would struggle too,” he said, explaining that he told the inspectors they had to come into Citrus Heights to access the property in Placer County.

“It all ended up working out, it just confuses everybody,” he said.

Citrus Heights Historical Society President Larry Fritz previously told The Sentinel that a land survey by the U.S. Government in the mid-1800s divided the area that is now Citrus Heights into one-square-mile parcels of 640 acres apiece. For reasons that remain a mystery, the government survey did not follow California’s county lines. It remains unclear if the county boundaries or the government survey came first.

Councilwoman Jeannie Bruins told The Sentinel the effort to incorporate Citrus Heights during the 1990s added another layer of jurisdictions to the area. She said homes in a neighborhood on Verner Drive north of Greenback Lane had Sacramento addresses, but were in Citrus Heights. Residents were able to get approval from the post office after a public petition and vote.

The irregular southern boundary of Citrus Heights is a result of a compromise with residents of that area who did not want to change their addresses at the time, Bruins said. Organizers also followed postal zone lines to form some borders, she said.

Life on the Edge is a new series by The Sentinel that looks at homes and businesses that are near the border of Citrus Heights. In the next installment, The Sentinel will take a look at what businesses have to say about life on the edge of town.

Read part 1 of this series: Life on the Edge: the challenges of living on the fringes of Citrus Heights