End of an era for Citrus Heights auto shop

Restaurant stimulus brings in over $600k to Citrus Heights restaurants, so far 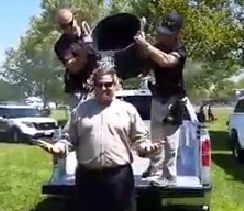 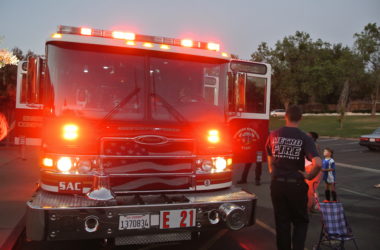 Firemen from Citrus Heights-based Station 21 were out offering safety tips and a kid-friendly tour of their fire engine at the monthly Birdcage Heights Neighborhood Association meeting, Wednesday night.

Inside the cafeteria of Skycrest Elementary, Captain Brian Gonsalves was joined by two others from the Sacramento Metropolitan Fire District to answer questions from the audience and share about their role in the community, before moving outside for a fire truck tour.

Kids enjoyed a hands-on tour of the truck, some taking a seat inside for a photo, and others watching Firefighter Paramedic Tyler Craft “gear up” — a head-to-toe task that takes about a minute in the station, according to Craft. 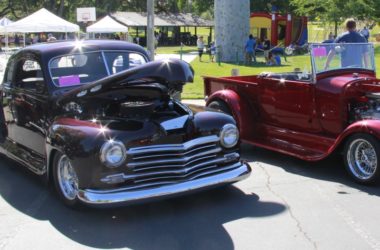 Citrus Heights held its first “Hot August Bites” event over the weekend, with classic cars, live music, food trucks and a bounce house for the kids filling up Rusch Park for the evening.

The three-hour event delivered on its promise for a family-friendly evening, complete with a free swim offered at Rusch Pool, a rock climbing wall and a classic car show put on by Auto’s for Alzheimer’s. The Tone Monkey’s also performed live music in the park for attendees.

Hosted in partnership with the Sunrise Recreation and Park District, the event replaced the annual “Summer Concert Series,” which was discontinued due to low attendance of the series in past years, according to organizers. 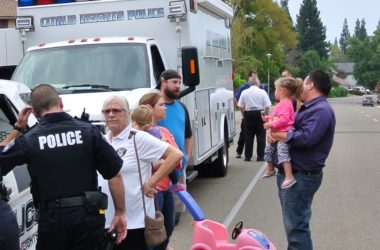 With ice cream socials, picnics, barbecues and more, 16 different neighborhoods across Citrus Heights participated in the 31st annual National Night Out yesterday, as part of a country-wide effort to prevent crime by connecting neighbors and building local partnerships between the community and police.

Beginning as early as 4 p.m. and continuing well-after dark, residents around the city gathered outside their homes and on quiet neighborhood streets to get to know one another and do their part in preventing crime in their area.

Citrus Heights police officers made an effort to show up at each event around the city, seeing the night as a way to increase trust, build strong communities and reduce crime, according to Officer Anthony Boehle, who was out participating in a small parade in the Greenback Wood area. 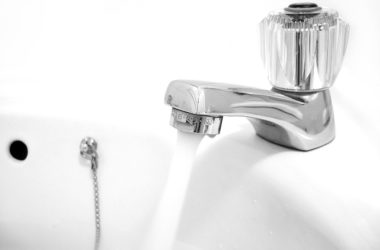 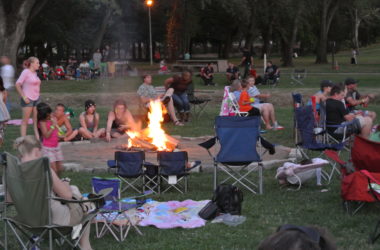 Dozens of tents dotted the grass at Rusch Park this weekend, as the Citrus Heights Community Camp Out kicked off with live music, star-gazing, hot dogs and more, at the annual overnight event.

Drawing about 200 sign-ups from residents, camp organizers said they were happy with the turn-out, given competition from opening weekend at the nearby California State Fair.

The annual event is sponsored by the Sunrise Recreation and Park District, in collaboration with the City of Citrus Heights and the volunteer-led Residents’ Empowerment Association of Citrus Heights. 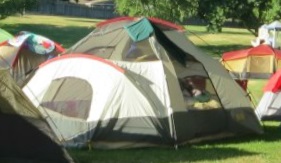 Community Camp Out to Fill Rusch Park with ‘Tent City’

Called Citrus Heights’ “legitimate tent city,” the annual Community Camp Out plans to take over Rusch Park this weekend with an activity-filled overnight event that promises to be fun for the whole family.

“This is an opportunity for mom and/or dad, grandpa and/or grandma to take the kids camping and never leave the city,” said Tonya Wagner, president of the Residents’ Empowerment Association of Citrus Heights.

Beginning in 2001, the event has continued to bring the community together outdoors, with organizers’ saying last year’s event drew over 200 people to Rusch Park.

Campers can expect swimming, crafts, games, face-painting, balloons and entertainment — along with a dinner barbecue served by city council members. The evening will also feature a bonfire with s’mores, and star-gazing opportunities by the Sacramento Valley Astronomical Society members. 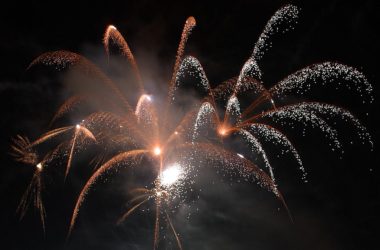 Residents of Citrus Heights exercised their freedom to celebrate the nation’s 238th birthday in a variety of ways, from setting off fireworks in the street outside their homes, to barbequing with family, to reading the Declaration of Independence, to watching the new “America” documentary at the Greenback theater.

Although City Hall was closed in recognition of the day, Citrus Heights Police Officers were on the job, responding to calls of illegal fireworks in conjunction with Metro Fire, according to a post on the Department’s Twitter feed.

Near the heavily trafficked Sylvan Corners, a volunteer group from New Hope Street Ministry took the opportunity to fund raise by selling fireworks at a TNT booth — spending the evening at the Corners until the 10 p.m. deadline the group said the county imposes on fireworks sales.